Within AQUACOSM-plus, some of the Grand Challenges for aquatic ecosystems (e.g. eutrophication, global warming, salinisation, greenhouse gas emissions) will be investigated by mesocosm experimentation. Within WP 8.1 (Lead by Ludwig-Maximilians-Universitaet Muenchen) we performed an experimental investigation of Grand Challenges using a mobile and lightweight mesocosm system (developed earlier in this project, in WP 7.1, by the same partner) and cost-efficient sensor system. 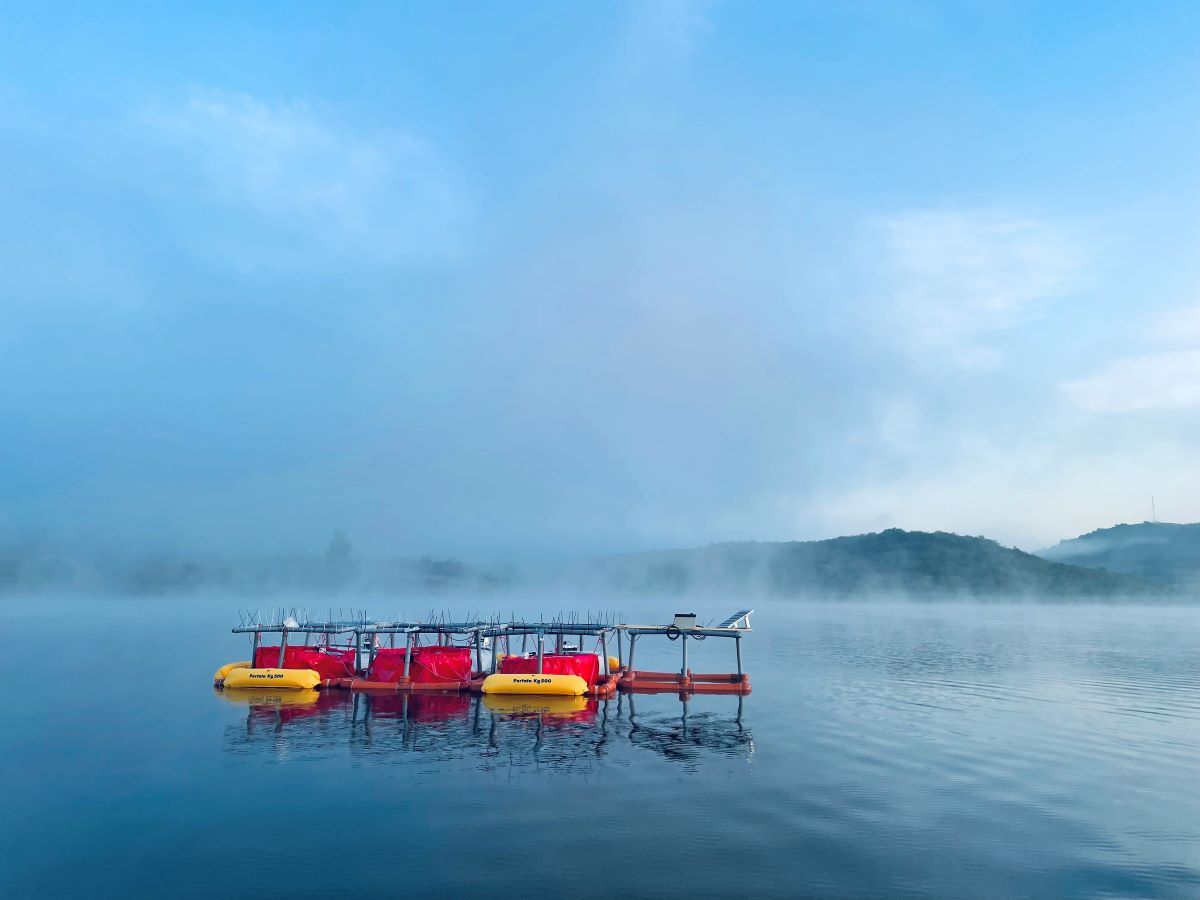 Among many other effects, global warming often has a positive effect on the development of cyanobacterial blooms, especially in shallow lakes. Due to the faster warming of the water column in spring, a stronger and more shallow stratification can establish. Studies show that such changes in stratification can have a lasting effect on the composition of the phytoplankton community. Very often, an increased risk of cyanobacterial blooms is mentioned in connection with warming and simultaneous eutrophication. Our own studies, however, show that even the sole change in stratification can lead to increased cyanobacterial blooms. Phytoplankton at shallow mixing depth is confronted with an altered light climate compared to deeper mixing. Phytoplankton at shallow mixing depths is exposed to a broader light spectrum and, thus, more red light. The consequence, according to theoretical predictions and a previous mesocosm experiment, is that this leads to increased cyanobacterial abundance. The reason for this is the ability of cyanobacteria to use the red spectrum wavelengths of light much better for photosynthesis than other phytoplankton. Previous experiments tried to reveal this in mesocosm experiments with mesocosms of different depths. However, different depth mesocosms pose a problem of holding different water volumes, which might also strongly influence nutrient availability and temperature regimes and, therefore, biomass. One way to avoid this is to actively change the incident light spectrum into the mesocosms while maintaining the same experimental volume. For this purpose, we established a mesocosm setup that had constant experimental volume but manipulated the red-light distribution across experimental treatments. 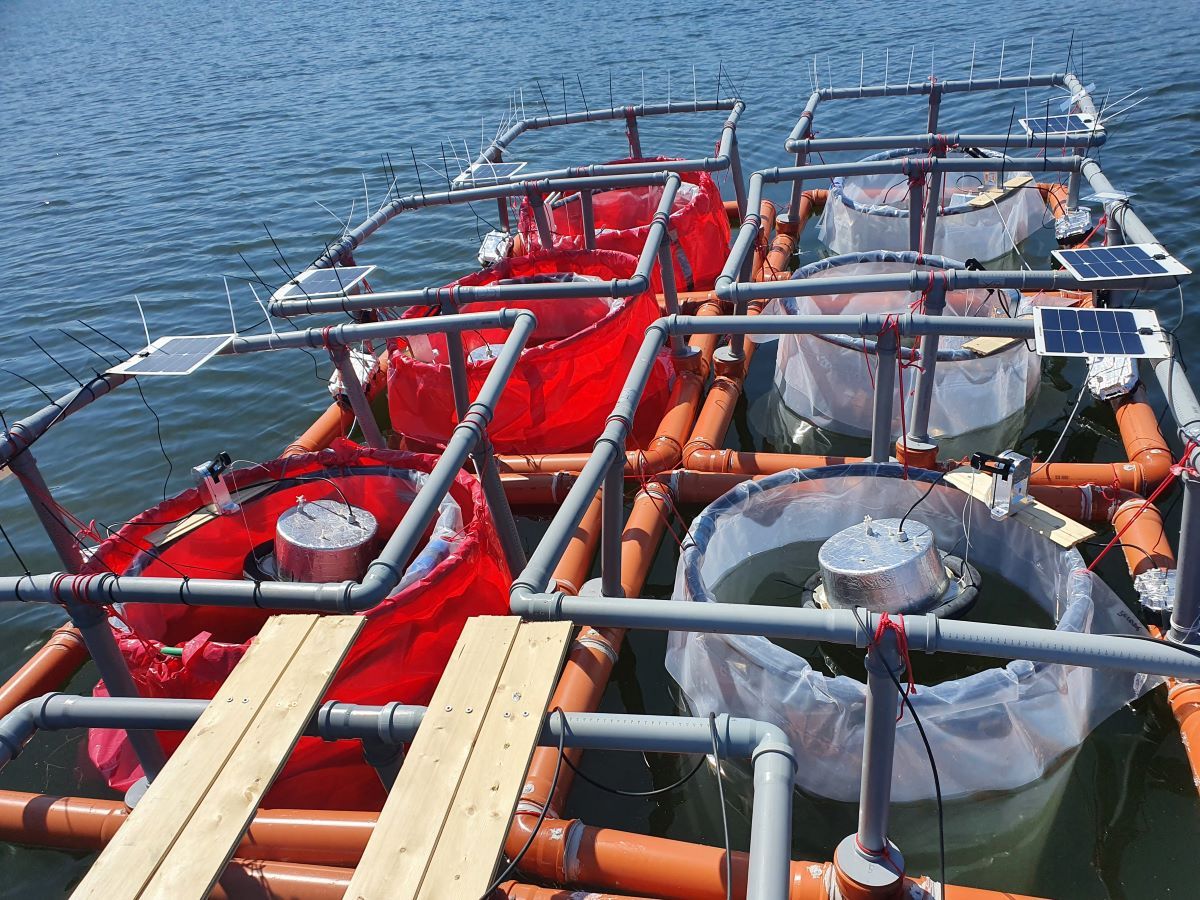 Another Grand Challenge is the emission of greenhouse gases from ponds and lakes. Experimental testing of the role of aquatic systems in greenhouse gas emissions and carbon uptake is critical to understand the driving mechanisms of gas fluxes between aquatic systems and the atmosphere. CO2 dynamics vary over short time scales and CH4 emissions in shallow waters are dominated by ebullition, which is episodic in nature and discrete in space and time. Reliable estimation requires near-continuous sampling. A prototype of a cost-effective sensor system consisting of a measuring chamber, a sensor package and a flushing mechanism capable of such near-continuous measurement of CO2, and CH4 gas fluxes in mesocosm experiments was developed in WP 7 (Lead by the Aarhus Universitet). Recent research opened the question of how strong cyanobacteria are involved in the above-described gas fluxes. Hence, we combined the approach of inducing cyanobacterial blooms by light quality manipulations with high-frequency measurements of CO2 and CH4. For that, we installed 12 mesocosms and the necessary sensor units in the shallow Pike Lake (Romanian: Lacul Stiucilor), Transylvania, Romania and performed the experiment with researchers from the Institute of Biological Research Cluj (ICBCN), Romania. Six of the enclosures were pelagic mesocosms, six also enclosed the sediment (benthic-pelagic). The experiment lasted four weeks; stay tuned for the outcome. 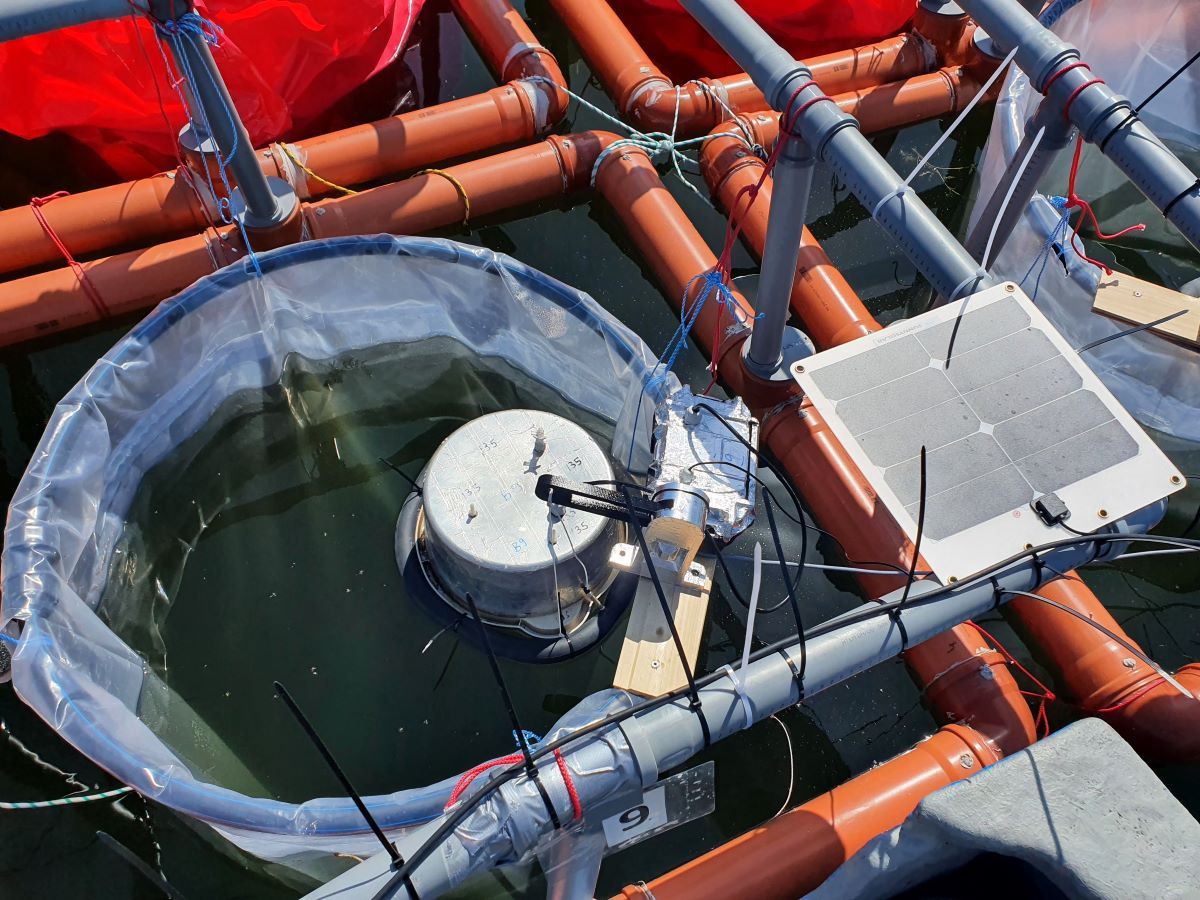 Figure 3: One sensor system for each mesocosm. Lifting device for swimming chamber where sensors are attached. Each system has a control device connected to a solar panel. Credit: Eti Levi